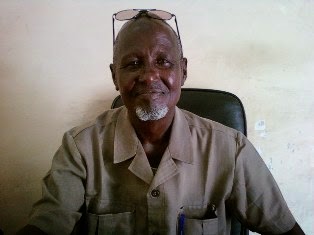 Imagine you wrote a Somali song. How would you put music to it and choose a singer? The beautiful pre-1991 Somali songs which Somalis enjoy listening to or watching are products of creative endeavours of a song writer, a mullaxan (vocaliser) who decided how the song will be sung and chooses a singer for it, and a person who put music to the song.

Before the Somali vocaliser, Abdikarim Farah Qaarey (known as Abdikarim Jiir ), the deputy director of the Somali National Theatre in Mogadishu, gave a series of interviews to Somali TV networks, how Somali songs become popular was a complete mystery to the public. Born in the port city of Hobyo in the Mudug region, Abdikarim Jiir began to take an interest in Somali songs after independence. He arrived in Mogadishu shortly after independence and auditioned for Radio Mogadishu song competition. While having a haircut, his song was playing on Radio Mogadishu. The barber was incensed by the voice of the singer and said: “Who let this person with such a bad voice become a singer?” It was then that Abdikarim Jiir realised that his future as an aspiring singer was in tatters.

In 1967 he joined Radio Mogadishu troupe as a what Somalis now call cod-sameeye (literally, voicemaker). Melodists worked with playwrights and song writers. Their involvement turned lyrics into a song before a music writer fills the gap with music compatible with the way the melodist vocalised lyrics. During the 1970s, the era of the Somali plays, Abdikarim vocalised songs by such Waaberi troupe playwrights and poets as Mohamed Ibrahim Warsame (Hadrawi), Mohamed Ali Kariye, Abdulkadir Hirsi Yamyam. “Words of the song guide me. I pay attention to the meaning of words, have a conversation with the song writer, vocalise the song and choose a singer”.

As to the factors that make a song a hit, Abdikarim attaches importance to the ability of singers. “All singers have different singing voices. You have to select a singer whose voice matches the song”. Among songs which Abdikarim vocalised are ‘Beledweyn’ by Hadraawi; ‘Naftu doqonsanaa’ by Mohamud Tukaale, and ‘Macallinka’ by Hassan Sheikh Mumin.Without Abdikarim’s role as musical genius reflected in Hadraawi’s song, ‘Beledweyne’ would hardly come to the fore. Hadraawi made use of complicated grammatical structures, conversational and poetic in tone. The first line of the song (Bi’iwaa jacaylow’–O love may you not suffer ) is vocative; it contains negative interrogatives such as ‘Sow taliye baasoo’ (‘Didn’t a bad commander…?’). “Vocalising a song is a skill that required focus”, Abdikarim told Horn Cable TV interviewer Abdulkadir Dulyar. To the collapse of the state, he attributes the poor state of Somali arts particularly Somali songs sung by one person sung with one person playing the organ. In my generation singing, song-writing and vocalising were a calling but now people who become singers view arts as means of livelihood”. Abdikarim helped many Somali sings rise to fame. One of them is the late Ahmed Awad Rabsho, who is remembered for Axaddii, a song written by Hadrawi and vocalised by Abdikarim Jiir.

Abdikarim credits his talent to his upbringing in an environment where exposure to work songs [hees hawleed] meant an opportunity to acquire knowledge of folk songs in different contexts. “I made use of the tune of traditional songs without people realising traditional songs’ tune shape the vocalisation”, Abdikarim said. In his monograph on the work of the late Somali poet Mohamed Hashi Dhamac (Gaarriye), the Somali linguist and literary critic Abdirahman Farah (Ina Guri Barwaaqo) discussed the genres of Somali poetry [maansada Soomaalida] about Gaarriye’s discovery of the Somali poetry metre in a series of 1976 articles in now-defunct Xiddigta Oktoobar. Farah discovered that Hadraawi unknowingly used two different song genres in the first two stanzas of the song ‘Suleekha’, sang by the late Mohamed Nuur Giriig. The first and second stanzas of the song are based on baarcadde and geeraar genres.

Among plays whose songs Abdikarim vocalised is ‘Hablayahow hadmaad guursan doontaan?’ [Young ladies, when will you marry?] written by Tukaale in 1975. Abdikarim views the play as a social critique on the ruling class of 1970s using their position and associated prestige to befriend girls and have night meals at Jungle bar [Baar Jungal]. “The owner of the bar was serving the cast for several weeks when the play was being staged at the Somali National Theatre in Mogadishu thinking the play was a publicity for his business. The 1980s revival of the same play was not as hard-hitting as the 1970s because the theme was diluted”, Abdikarim reflected.

Recently the Hargeisa-based Somali literary historian Boobe Yusuf Du’ale urged Somali people to give credit to the person who wrote a song, the person who vocalised it and the person who put music to it as well as being sure tomention the year the song was released and whether it was a part of a play. Thanks to Somali TV networks such as Dalsan TV, Horn Cable TV, SNTV and Universal TV, interviews with Abdikarim Farah Qaarey will blaze the trail in raising awareness about the collaboration that transforms Somali lyrics such as ‘Suleekha’, whose vocaliser I was not able to find out, into a song.

Liban Ahmad is a freelance journalist and translator based in England. He writes extensively on Somali politics, culture and Language. He is currently the Books Editor of New Dalka.