A journey of a thousand miles, goes the Chinese proverb, begins with a single step. After a long absence, I boarded a plane and made a trip to Mogadishu. Immediately, one is met by a city of contrasts: one seeped in its history, maintaining a link with its distant past, but one also transformed, changed and in some parts still scarred by recent decades. When I was last there—where I had once seen a dilapidated city, its bullet-ridden buildings a close resemblance of baghrir, Algerian ‘thousand-hole pancakes’ so-called because of their appearance—I now saw a lively city, vibrant, dynamic. New housing developments are rising in different parts of the capital, like a pimple outbreak, privately-funded ventures for those looking to capitalise on the stable but still fragile peace that now inhabits the city’s streets. Businesses are springing up too, operating in a marketplace which is still largely unregulated, beyond the state’s purview.

Older parts of the city look worse for wear, the result of a confluence of factors: rather naturally, age has taken its toll on them, exacerbated by the fact they were built many decades, or in some cases centuries, ago. The signs of war are evident on them too. The bruising effects of humidity have played their part; since Mogadishu is in the coastal Banadir region, perched on the Indian Ocean, it experiences higher levels of humidity than inland, which typically runs at seventy percent even during the dry seasons. Public transport is very much in operation. Well-serviced minibuses are complemented on the city’s streets by the increasingly ubiquitous “tuk tuk”, the auto trishaw, both in word and concept a loan from southeast Asia. These serve the public at low cost. Movement within the city is good except at crossroads. There, due to the lack of traffic controls, motorists struggle to navigate the clogged streets, which, at peak hours, are filled beyond their capacity. The main streets are bustle with people and their energetic chatter. Many―like one of the capital’s busiest roads, Makkah Al- Mukarramah Road— were rebuilt by the Turkish Government and the Mogadishu Municipality and are lighted by solar street lights at night. The latest pickups and 4WD car models are common. Many are armoured, which is a new phenomenon. Guns are largely only carried by the state security personnel and security companies.

The public does not carry guns, at least not openly; it’s probable, that some may have hidden pistols on them, a reflection perhaps of the hushed murmur of insecurity which lies below the surface. I can still vividly recall the image and time when most―if not all―vehicles had armed guards almost as a prerequisite to navigating the city’s streets. For a metropolis, the cost of living is not very high, even though the main currency American dollars creates higher prices. But the cost of living is not universally easy to shoulder. Like much of the developing world, unemployment in a city like Mogadishu is markedly high, no doubt a consequence of its pull factors, attracting in their droves, people from the rural areas who pin high hopes and expectations of what a city can offer them and their families by way of a new life. Somalis may say, ‘Rajo ayaa lagu nool yahay’ [We live on hope!] but many of these new residents rarely find their hopes met, finding themselves locked out of the competition in an already challenging environ. Those among them, and others too, who wish to transport agricultural produce to the city soon find themselves taxed by militias and Shabab; whether these levies are prohibitive naturally depends on how broad one’s shoulders are.

Security is bearable, apart from the occasional suicide vehicles which devastate their targets and their surrounding areas. There are largely targeted assassinations and overall security has and continues to improve. The landscape in the countryside is different as Shabab controls large chunks of the South and South Central. But the security organs like the police, intelligence and paramilitary are established and fully functioning. Government departments are established and functioning; although an encouraging development―I remember when these were either non-existent or were merely a figment of the hopeful imagination―to the locals, government can often seem distant, inaccessible and ineffective. Efforts, however, are being made to broaden its scope, to which regulation between different areas will be vital. Quality of life has improved greatly. Many restaurants serve a fusion of Italian and Somali cuisine. Many good apartment buildings have also been built. This is new and must be the influence of the diaspora returnees.

Those who were accustomed to and grew up on Somali-grown produce are bound to be in for a surprise. The excellent quality local fruits are no longer; even the simplest of necessities are imported. Papayas, traditionally served as a dessert, are hardly seen! Bananas are poor cousins to the delicious types that, in earlier days, were freely available. Nowadays, lemons seem to be the crop of the day, grown for export as dried lemon to the Gulf, no doubt being used for skin “fairness” treatment. When one considers the blight the cultivation of lemons is having on Somali people―satiating the appetite of other nations’ cosmetic needs while the locals’ basic dietary needs are not tended to―the phrase “skin fairness” treatment then seems an oxymoron. It is, surely, anything but fair. But still due to the bigger agricultural base, Mogadishu and environs have the best and cheapest local produce, such as sesame seeds and oil, corn and beans which are all used for daily dishes.

The number of medical centres and pharmacies are many, with varying standards. There is an urgent need for government control on the administration and indeed quality of drugs. Now drugs are traded like any other product and majority of drugs’ potency are subsequently suspect. Education has expanded but here too, there are no control of standards. Many who spent time and meagre resources are short-served by a substandard “education”. They are mostly businesses for profit. Thus a whole generation who are not qualified are released to the economy with all kinds of certification. This is true at all parts of the Somali peninsula, which helps explain why so many graduates are unemployed.

Electricity is supplied by two companies, who consolidated the smaller companies. Even though prices went down, 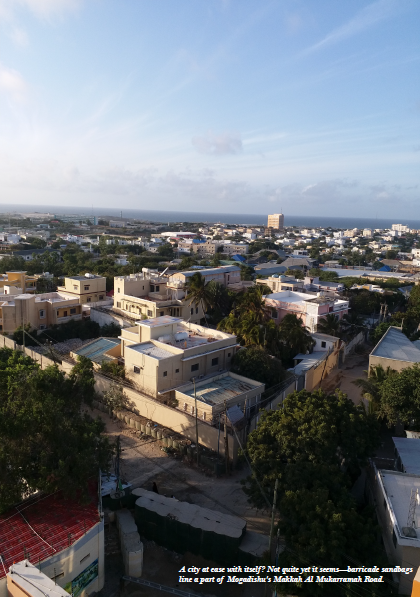 it is still expensive, hindering industrial development. The city’s settlements are polarised on a clan basis. This city, which was once highly cosmopolitan, has been fractured into separate suburbs. Movement within the city is normal enough, but due to the sense of insecurity, people tend to coalesce to where their sub-clans live. In the long term this is not good for a city which has a long, vibrant history. If the city is to regain its old splendour, it will have to embark on a long journey. But every journey surely does begin with a single step.

This month, all the hujjaj [pilgrims] return to their homes from Arabia, having completed the rites of Hajj. In the not so distant past, until perhaps the early twentieth century, before the advent of affordable long-distance travel, from Somalia, the journey to and from Makkah could have taken a year, if not more. Indeed, now, we need not look much further than the city of Mogadishu itself to be reminded of how arduous and long any worthwhile journey can be. Mogadishu’s Makkah Al- Mukarramah Road―named after the holy city of Makkah―has traditionally been seen as a vital road, connecting as it does the north and south of the capital. Funds for it to be built as a fourlane road came from the Saudi monarch, King Faisal; as a recompense, the Somali government wanted to name it after him but his wish that it be named after the Hijazi city ultimately prevailed.

Symbolically, the road has been through thick and thin. During the civil war, it was cut off; in the 1990s, one of the adjoining side-streets to it became known as “Bermuuda” after the Bermuda Triangle, on account of it being a hotspot for thieves and kidnappers. Last year, Makkah Al-Mukarramah was one of the first roads rebuilt by Turkey and the Mogadishu Municipality. With a fresh layer of tarmac and illuminated by solar streetlights, it seems a far cry of the devastation it previously knew. But its fate is by no means sealed. Just this summer, in July, a car bomb blast along the busy road near the Waberi police station left five dead and at least 13 others wounded. Such occurrence was not an anomaly; on other occasions, several cars, abandoned along its length, have or were intended to wreck havoc, through similar blasts, just in the last two months. But this road, like this city and its people, has known resilience.

There is no doubt that its journey to recover has already begun. But it will certainly a marathon, not a sprint, before it can reclaim its reputation as ‘the White Pearl of the Indian Ocean’. Like the hajj journey of the past, that journey will be beset by many challenges. As the Somali hujjaj return, one can hope that they can bring with them the blessings, prayers and curiosity, so desperately needed in this time, which once led a certain Ibn Battuta to its shores, almost seven centuries ago. Having initially set out from his home to complete the hajj, it was while journeying that the young jurist discovered a love for travel. Covering 75,000 miles, it would be three decades from when he first left home before he would return to his home town of Tangier. This year marks 26 years from when civil strife broke out in the Somali peninsula. Like Ibn Battuta, one can hope Mogadishu’s people will soon see the city they knew, with all its vibrancy, dynamism and peace.

This dispatch was written by one of our readers, M. D., reporting from Mogadishu.