This book is a welcome addition to the shelves of those interested in the country’s journey from colonialism to independence. Constituting over 500 pages, this gripping, lucid narrative sheds light on the detail of a period whose events arguably continue to have an impact on the nation’s politics, awareness of which has understandably but unfortunately been eclipsed by the ‘boom’ in studies of the more tragic events of the last few decades.

The book is divided into twelve chapters, each varying in length anywhere between just under twenty pages to 85. Although the book surveys the period from 1941 to 1969, the bulk of the analysis is devoted to the events of pre-independence (i.e. before 1960) with only one part out of three covering what in Somali circles is often characterised as the ‘democratic decade’.

The main thesis lies in uncovering African, or more specifically Somali, agency in the decolonisation process, challenging the age-old assertion that most modern woes on the continent can be solely traced back to the role of the colonisers. The reputation of lesser-known parties, such as those of La Conferenza [The Conference, in Italian] coalition, is rehabilitated, from the retired trope of them simply as pro-Italian and therefore, as the depiction held, less patriotic than parties such as the Somali Youth League (more commonly known as the SYL or the Lega). 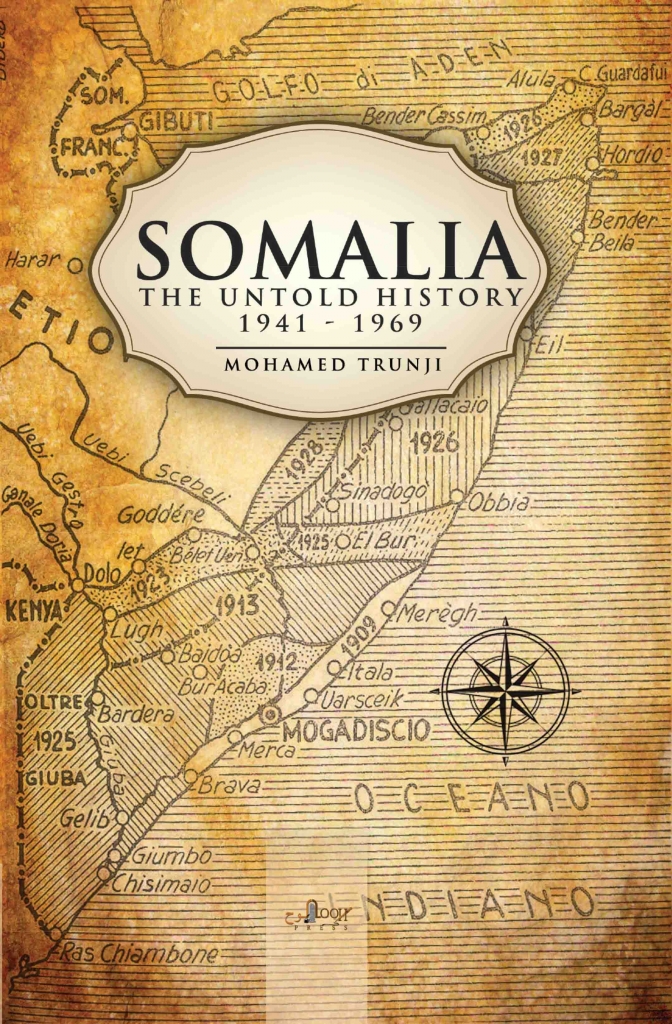 , nationalism in pre-independence Somalia is presented as contested, broadened beyond the SYL which has characteristically dominated the literature and public conscience. This suggestion is underpinned by an exploration of the political ideology of these non-Lega parties, which is presented as detailed and thorough.

The focus on the non-Lega parties’ ideological underpinnings could have been tempered however by an acknowledgement of the practical factors underlying the coalition’s stances, which might reasonably be thought, even more than ideology, to have dictated their agenda, no less their partiality to continued Italian presence. The Conferenza, as an alliance, had of course been constituted in September 1947 at the instigation of Italian propaganda agents, who were financed by Italy’s Ministry of Colonies. The view then that the Conferenza’s relationship with the Italian authorities should be read, at least partly in terms of intra-Somali competition for advantage and resources, is only further bolstered by the realisation that the coalition was funded, directly or indirectly, by settler Italians or even Italians formally tasked to run the Administration. Conversely, that these parties’ proximity to the Italians was soon replaced by estrangement, particularly after the Lega’s rapprochement with AFIS, could equally have been underlined as an illustration of the dynamism of the politics in the period.

The author’s work has the unique distinction of being the first published work informed by the personal diary of Somalia’s first president, Aden Abdulle Osman, kept throughout the decade from 1957. (Abdi I. Samatar’s recent Africa’s First Democrats, published in the autumn of last year, was the second.)

This allows the work to draw upon contemporary—rather than retrospective—accounts thereby removing some of the shortcomings of inaccuracy and ‘mis-remembering’ faced by those dealing with oral testimonies.

Working their way through the tome, readers are likely to be slightly inconvenienced by the variability in footnoting. Apart from a handful of instances, secondary material rarely receives acknowledgement ‘below the line’. While primary sources are generally cited with more consistency, when this does not happen, the provenance of certain pieces of information is obscured. Thus, in certain instances, unable to decipher the source of details, the reader is left unsure in which vein to interpret them.

A glaring example relates to the circumstances in which a group of deputies gained (or regained in some instances) cabinet positions (pp. 507-8). The explanation proffered—that ‘cabinet positions were given as a reward for supporting Abdirashid [Ali Sharmarke] in the [1967] presidential election’—is left unsubstantiated. Does this observation come—as is likely—from the diary of President Osman? Or is it the author’s own assertion? In his recent, posthumous autobiography, for instance, Abdirizak Haji Hussein recalled how the whole episode of ‘who had voted for whom’ had been characterised by speculation (p. 261), which

lasted, on the public’s part, for two weeks. If the work under review, therefore, runs into subsequent editions, it is hoped that the author will utilise this publicly-available work alongside Osman’s diary already in his possession. So doing would allow the mutual balancing, of the Osman and Hussein’s writings, two equally-distinguished politicians, who despite their shared credentials (in Samatar’s words) as Africa’s first democrats, often found themselves—as in the 1959 parliamentary revolt—on opposite sides and therefore offer contrasting perspectives to the historian.

Finally, even if subsequent works challenge or dissent from the main thrust of Trunji’s argument, this rich work would have surely served its purpose: indeed, the author begins the book, noting that ‘Some may disagree with some aspects of my research. I make no apologies but rather submit my analysis as a challenge’. Thus, if the contents of this book have stimulated debate—as they already have—this addition has encouraged many Somalis to think about their past, encouraging them to evade the existential threat evoked by the profound warning that a people or nation without a history do not deserve to be characterised as such.