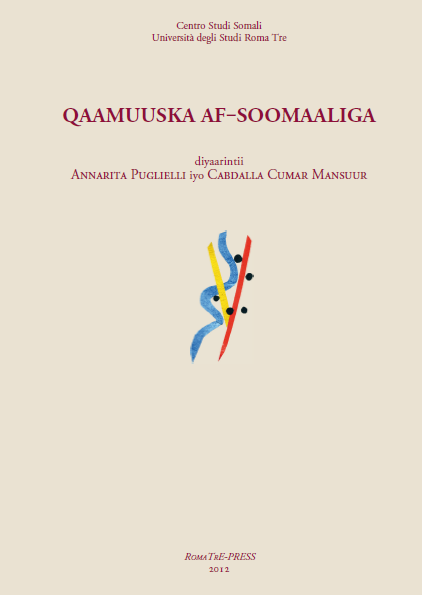 In 2012 Roma Tre-Press published a monolingual Somali dictionary. Staff of the former Department of Languages at the Somali National University began work on the dictionary began in 1985 as a part of Somali-Italian Cooperation. Due to state collapse in Somalia in 1991, the work on the dictionary came to a halt. Later, Somali and Italian scholars resumed the project.

Lexicographers adopted English alphabetical order for the dictionary entries, following in the footsteps of Yaasiin Cusmaan Keenadiid, who edited the first monolingual Somali dictionary in 1976. Annarita Puglielli, Cabdalla C. Mansuur and other lexicographers made use of the Somali terminology developed after the Somali language had been adopted as a medium of instruction in October 1972.

It is a dictionary that every Somali translator or journalist should have to avoid making spelling errors that one comes across when reading Somali websites, books, magazines and journals. The dictionary teams made effort to include different variants for entries. Noun entries are identified by gender, not by declension group. This dictionary raises grammar questions about verbs and adjectives. The Somali equivalent of ‘good’ is ‘fiican’. The dictionary identified the grammatical category of the word as an intransitive verb like tag [to go]. Puglielli and Mansuur’s choice to categorise fiican as an intransitive verb is based on a classification made by the late Professor B. W. Andrzejewski, who described the Somali adjective as a ‘hybrid verb’. In the Somali Reference Grammar, Professor John Saeed identifies fiican as an adjective. Somali has a second type of an adjective which, when used attributively, is followed by a verb ‘to be’ such as geesi [ brave] and deeqsi [generous]. The dictionary categorised this type of adjective as a noun. It has a feminine form—e.g. geesiyad and deeqsiyad—and can be used comparatively and superlatively.

The Somali language has intransitive verbs with transitive properties e.g. qadee [to lunch] and mataanee [to give birth to twins]. This dictionary categorises qadee and mataanee as intransitive and transitive verbs respectively. Linguists have divided Somali verbs into two groups: conjugation groups (1-4) and irregular verbs such as oro, aqoo, ool, and imow. In the dictionary, the simple past form of conjugation group 1 word dheh [to say] is yiri when used for the first person pronoun although yiri is the simple past tense form of the irregular, variant verb oro [to say] for third person masculine pronoun as in Wuxuu yiri, “Berri baan dhoofayaa” [He said, “I am travelling tomorrow”]. These are minor oversights that lexicographers can address when preparing a second edition.

The dictionary is available online free of charge.

This review was prepared by Liban Ahmad, New Dalka‘s Books Editor. The Somali dictionary can be accessed here.