In this era of instantaneous communications, ever faster snap decision-making and short-termism seem to be rife. Naturally, the traces of haste are easily deciphered in one’s pronouncements, resulting in often strange, overly-dramatic words. At the start of this month, one of our contributors caught sight of a tweet from a Somali user. Written, no doubt, in response to the unpopularity of the current Cabinet in light of the Qalbi Dhagax case, the Tweeter called upon the head of the government, namely the Prime Minister, to take his leave. This user was evidently voicing a legitimate grievance against an action which the administration had, at best, not sought to make amends in bringing those responsible to book, at worst either known about, permitted or even been complicit in. That all sounds reasonable so far. 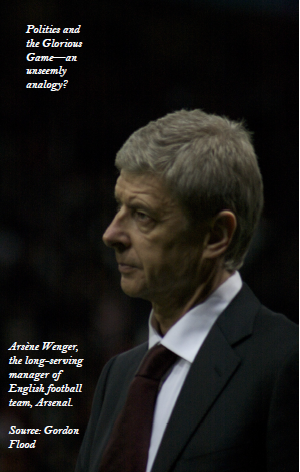 When our contributor scrolled down this Tweeter’s timeline, however, they happened upon another tweet which provided a quirky context for the one about the Somali government. In the second tweet, written just days prior, the Tweeter revealed himself to be a Gooner, a supporter of the English football team, Arsenal FC. That was not the end of it, of course. The Tweeter proceeded to prove himself a loyalist of Arsène Wenger, who will have been the club’s manager for the last 21 years, this October. Our contributor’s mind could not help but reflect on comparing the current Somali administration and Arsène’s legacy at Arsenal.

Known as “Le Professeur” to fans for his studious demeanour, Wenger has been described as revolutionising English football, introducing trendsetting changes in the diet and training of players as well as being among the first managers in English football to scout for talent abroad.

Twenty-one years, of course, is a long time. Wenger’s career (and fate!) has certainly had its highs and lows; his reputation, and the absence of a Premier League title since 2004, seems to have been ameliorated by the three FA Cup trophies his team has scooped up in recent years. The current administration in Mogadishu has been in office for just over six months—half the life expectancy typically enjoyed by most cabinets in the country. Time will tell whether it can, like Wenger, redeem itself and recover from the uproar that has resulted from the events in recent months. Will readers, and the Somali people, give the administration a second chance? Time will tell. The irony, in this Tweeter’s words, was of course not lost on us. Arsenal Football Club of course started life in 1886 as a football team of munition workers from Woolwich, south east London. On second thoughts then, does this Tweeter consider his words a misfire?

For the time being, it seems the jury is out. On social media, the “mainstream” Somali media, in cafes, in the streets, people have read the recent events—no less, the Qalbi Dhagax case— in different ways: some advocating for the current administration to be unseated, while others have decided to err on the side of caution. Perhaps, like Arsenal fans—followers of the team originally founded for munition workers— Somalis around the world have decided to “hold fire”?

We can only wait and see.